Some would say that U Nyo Lay was unlucky.Born in 1938,he was soon stricken by polio then suffered an accident at the tenderage of eight that left him unable to walk.Twenty four years later,a second

accident made it impossiable for him to stand up or lift his head.Unfortunately,as the saying goes,bad things come in threes and a few years later fate would deliver yet another below.This time he was so

badly injured that only his left and was left functioning.

Yet U Nyo Lay has left an artistic legacy in Myanmar,one that takes ncredible skill and patience.Using slanted paint brush,he was able to create remarkable works of art inside of glass bottles.So intricate,so

precise were the paintings that many people did not believe they were real.But they were and although he passed away in 2007,his art lives on though his daughter Ni Lar.

addicated to it and started carrying it around in glass bottles.To denote the ownership of bottles with traditional scenes or symbols.Eventually,in the 1800s,the art of painting inside the snuff bottles

began,more as a decorative item rather than functional.

Yet the art from remained unknown in Myanmar until the 1980s.And the story of how it came to be is one of passion and perseverance.

U Nyo Lay discovered his artistic talent at the age of 12,learning from magazines featuring famed national artists like U Ba Gyiand U Aung Soe.After matriculation he became arts chairman in this native

township of Pyo Bway.At that time he also began to build a reputation as talented wood carver,cartoonist and signboard maker.

But in 1978,bed ridden and with limited mobility,U Nyo Lay once again found artistic inspiration.He read a magazine by artist Daw Saw Mon Nyein which featured an article about bottle art in Chian.U Nyo

Lay was fascinated.Over the next eight years he taught himself,through trial and error,how to decorate the inside of glass bottles.Ironically,his physical disabilities actually helped him hone the delicate skills

required to paint-his body being immobile,he could keep a steady hand while holding the brush.

What started as a hobby quickly developed in to a career.U Nyo Lay’s bottles were highly sought after and he was even flown to Thailand to present a bottle to a member of the Thai Royal family.He

brought such attention to Myanmar’s Cultural scene that the government rewarded him with a generous prize.

However,U Nyo Lay was concerned.He was the only one in Myanmar possessing these skills.Although a few other artists had started to study,no one had mastered the art of bottle painting.But his

daughter,Nilar,showed a keen interested in painting and studied alongside her father.

It took her around a decade to perfect her talent. Unfortunately U Nyo Lay passed away in 2007 but Nilar carries on his legacy .Working from her home in southern Mandalay,she is more than happy to

demonstrate the process for guests.

Any glass bottle with short neck can be used.There is no tamplate,no stencil.Nilar dips a slanted paint brush into paint and inserts it into the bottle,carefully creating designs inside the glass.The level of

detail is incredible.It takes around twenty days to complete a bottle but more complicated designs can take up to two months.Depending on the size and details,prices vary from 100,000 up to 300,000 Ks.

Unlike other bottle artists in Myanmar who sell contemporary designs or ‘tourist’ designs,Nilar continues to draw traditional scenes like her father.She also does commissioned portraits and has painted bottles featuring everyone from Aung San Su Kyi to Jerry Garcia.

Nilar said that although many have expressed interest in learning,few have the patience and the steady hands required.She is concerned her farther’s legacy will die out.’I am very proud of what he did and want to continue bottle art.It brings attention to Myanmar’s arts scene and lets the world see our creative talents’. 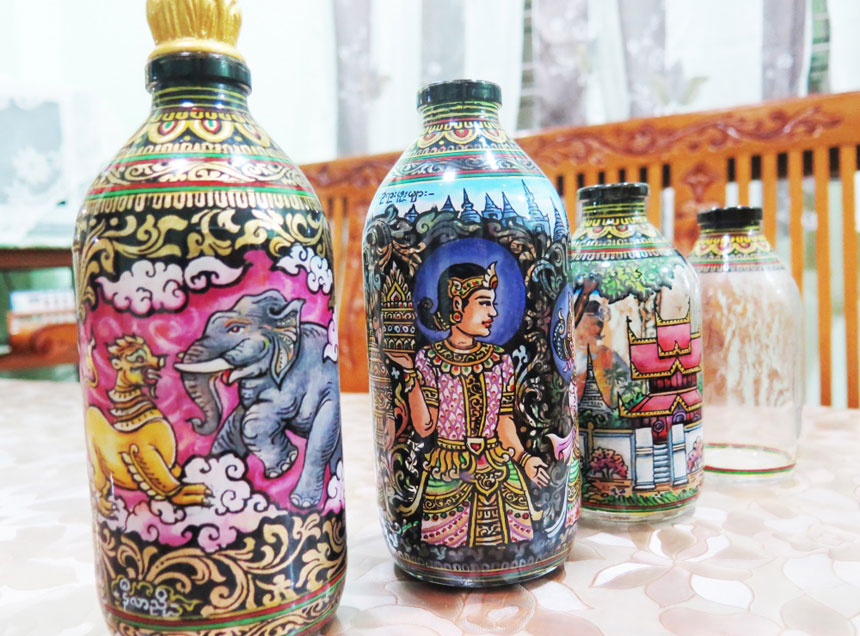 © Made in Myanmar (www.madeinmyanmar.asia).
Mobile App & Web Design by: NetScriper

A Collection of products Made in Myanmar

Get in-touch with us: